WOW Festival – Where are All the Working Class Writers? 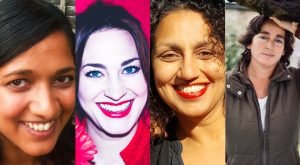 To find out more and book a ticket visit the WOW festival website here.

Natasha Carthew is a working class Writer and Performance Poet from Cornwall. She has written two books of poetry, three acclaimed Young Adult novels Winter Damage, The Light That Gets Lost and Only the Ocean (published with Bloomsbury) and her latest Adult literary fiction All Rivers Run Free (published by Quercus/riverrun). Her new prose-poem Song for the Forgotten was published with National Trust Books in 2020 and her latest short-story features in HAG: Forgotten Folk Tales, published by Virago Press October 2020. 2021 sees the publication of a new sequence of Performance Poetry celebrating the working lives of Working Class Women published by The Hypatia Trust.

Natasha has written extensively on the subject of what it means to be a Working Class writer and how authentic Working Class voices are represented in fiction for several publications and programmes; including Writers’ & Artists’ Yearbook, The Royal Society of Authors Journal, BBC Radio 3, BBC Radio 4, The Guardian, The Herald, The Bookseller, Book Brunch and The Big Issue. Natasha is the Founder and Artistic Director of The Working Class Writers Festival – in partnership with The Festival of Ideas and sponsored by Hachette UK and Penguin Random House.

Sharon Duggal grew up in north west Birmingham as part of a large Indian family. Her debut novel, The Handsworth Times (2016) was The Morning Star’s ‘Fiction Book of the Year 2016’ and Brighton City Reads 2017. Her short stories appear in anthologies including The Book of Birmingham and Love Bites: Fiction Inspired by Pete Shelley and Buzzcocks. Her second novel, Should We Fall Behind was published in October 2020 by award-winning independent Bluemoose Books to wide critical acclaim. Sharon is one half of Radio Reverb’s long-running The Ruben and Sharon Show, the UK’s only regular radio show with a mum and son presenter team.

Sadie Hasler is a multi-award-winning playwright, actor, columnist, and co-Founder/Artistic Director of theatre company Old Trunk. Her plays Pramkicker, Fran & Leni and Stiletto Beach are published by Bloomsbury. They have been produced in Washington DC, Chicago, Sydney, Melbourne, Oslo, Rome, Milan, Asti, London, Edinburgh, & around the UK. Sadie recently wrote an essay for the book Last Christmas alongside Meryl Streep, Stephen Fry, & many others, edited by Emma Thompson and Greg Wise and published by Quercus. She is currently under commission to adapt a Sunday Times Bestseller for the West End, and is developing Pramkicker for TV.

Mahsuda Snaith is winner of the SI Leeds Literary Prize and Bristol Short Story Prize. Her debut novel The Things We Thought We Knew was chosen as a World Book Night Book and her second novel How to Find Home was read on BBC Radio 4. She was named an Observer New Face of Fiction and was a judge for the Costa Book Awards 2019. Mahsuda has led creative writing workshops in universities, hospitals, schools and in a homeless hostel and is a commissioned writer for the Colonial Countryside project. Find out more at www.mahsudasnaith.com